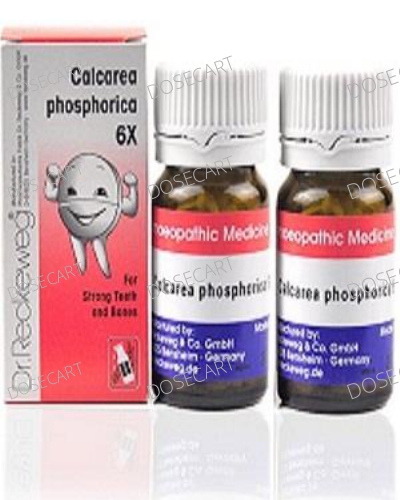 Add To Cart Save For Later

Calcarea phosphorica is basically important for the normal formation of new cells. It is mainly used to accelerate the growth of teeth and bones. Its absence or unavailability may result into problems related to normal growth. It assists digestion helps in forming a robust body. It is a tissue salt associated with nutrition.
Uses:
Calcarea phos is useful in defective nutrition, whether of childhood, puberty, or of old age.
It is used for psychological conditions, during depression or associated problems.
Patients who have a tendancy to glandular and bone diseases, in teenagers who have less height, problems that arise due to inappropriate intake of calcium, milk or diet can be benefited after taking Calcarea phosphorica.
Children with slow development of teeth, having a tendancy to form curves of the bones, Spinal curvature where development of spine is slow and the child needs support while sitting.
In children who are late to walk, Slow walking; neck too thin and weak to support head, Rickets, Calcarea Phosphorica gives good results.
Cold atmosphere that causes pains in joints and sutures (stitches), arthritic pains, hip joint diseases are relieved when administered with Calcarea phosphorica.
Used in fractures that take time to heal; slow healing.
Complaints that arise after Change of weather are better after taking Calcarea Phosphorica.
Common symptoms:
Sensitive to cold in any form, is commonly found in Calcarea phos patient, backache problems, arthritis that arise in winter seasons.
Burning and pressing pains, itching, weakness with numbness in body parts is commonly seen.
Enlarged tonsils with pain, cannot open mouth; is cured with help of Calcarea Phosphorica.
Coughing complaints that come when lying down. Pain in stomach after eating, problem of gas, flatulence, unsatisfactory feeling after passing stool.
Pain in the kidney region while passing urine.
Stiffness and difficulty in movement of neck, joints , back when walking.
It is helpful for the problem of piles that burns during evening time.
Calcarea Phosphorica works best in Menstrual problems associated with severe back pains, school girls headache during puberty, during menses and for white discharge in females.
Dosage:
Put tablets into mouth and allow them to dissolve under the tongue.
Adults and adolescents (12 years and older) 2 to 4 tablets,four times daily, or as recommended by your healthcare practitioner.
Children (under 12 years) 2 tablets twice a day.
In acute cases- a dose every hour or two.
In severe, painful affections a dose every ten to fifteen minutes.
In chronic affections one to four doses daily.
Precautions:
Always keep a gap of 15 minutes before or after meals when you take medicine.
If pregnant or breastfeeding, ask a homeopathic practitioner before use.
Avoid eating tobacco or drinking alcohol during the course of treatment.

The information in this Website/Application is for information use only. The information is not intended to cover all possible uses, common side effect, precaution ,drug interactions etc nor should it be construed to indicate that perticular drug is safe.Please consult your doctor/physician before taking or changing any medication or changing your diet.

Please select your city, Delivery charges may vary depends on the delivery location